The aim of the project was to make a robot that can pick-up upto 2 ping-pong balls from the ground and shoot them such that it lands on a point 3m away with a margin of error of 3 cms. The robot was supposed to participate in IIT Bombay’s Techfest in 2015.

The arm of the robot was made using corrugated plastic sheet and was controlled by a servo motor using a microcontroller. The manipulator(gripper) comprised of a PVC tube with a servo shutting a cap such that the ball is forced into the tube. The mechanism could load 2 balls at once and store them for later use.

The control was done through a wearable glove with two flex sensors and an accelerometer. The operator could switch modes by bending the fingers which had flex sensors. The combination of two fingers could trigger 2^2 modes on the robot. 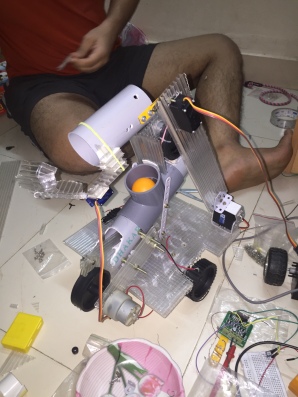 View all posts by parakhm95

This site uses Akismet to reduce spam. Learn how your comment data is processed.